What sounds like the title of a thrilling book is actually the order of the day for Ehlert GmbH and the meat industry. Hundreds of Corona cases are currently being reported in meat factories. Critics and representatives of the meat industry disagree. Agriculture Minister Julia Klöckner insists on compliance with the rules to contain the virus as well as the monitoring of the same by the authorities. Greenpeace, on the other hand, is of the opinion that Klöckner is misjudging the situation. She was not aware that this was not a problem of individual farms, but that the whole production had to change.

The meat industry came under the spotlight after about 260 of the 1,200 employees at one meat processing plant tested positive for CoViD-19. Another farm reported a total of around 400 cases. This calls for “fact-free information” from individual politicians and trade unionists. Klöckner and the ministers Heil and Spahn want to counteract this with a round table. In this blog post, we’d like to take a brief look at current events. We also present the five-point plan of the Meat Industry Association.

Working conditions in the meat industry

Not only, but especially after the Corona cases became known, aspects such as animal welfare are not only at the top of the list. What is the state of hygiene in meat processing plants? How are employees housed and fed in the meat industry?

The minimum wage of 9.35 euros applies to around 80,000 employees. The industry nevertheless stated that the employees were subject to compulsory insurance and were covered by collective agreements. There are no official figures for the accommodation of the workers. However, the meat industry does not deny that employees are housed in collective accommodation. These can be vacant apartments as well as barracks buildings. There is a simple reason for this: when forces are housed individually, the cost of housing rents increases significantly, making many farms, especially smaller ones, uncompetitive.

Why no work stoppage in the meat industry?

The head of the meat industry association, Heike Harstick, defended herself against the accusations. Poor staff accommodation was not the reason for the Corona cases, he said. Unlike the automotive industry, for example, the meat industry could not immediately put work on hold. Finally, the supply of food must be guaranteed even in times of crisis. Harstick doesn’t see the meat industry or the supply and housing of workers as the only culprits.

But is the Germans’ favourite food only so cheap because the workers in slaughterhouses are not paid well enough? There are always two sides to a coin: the public is understandably alarmed by the Corona cases, but still wants meat at low prices.

It is not only in Germany that meat plants are considered hotspots for infections with the Corona virus. Increasing cases of the lung disease are also being reported in the USA. Many meat plants are at a standstill, but President Trump is ordering a resumption of work to ensure the meat supply.

But the working conditions there are far from ideal. The assembly line speed of pork or chicken has recently been increased. As a result, the employees stand shoulder to shoulder and are usually unable to breathe freely because their physical condition is additionally challenged. As a result, they usually remove the mandatory breathing masks completely. There is also the question of whether the cold, rapidly circulating air additionally favours the spread of the virus.

In the USA, employees from the meat industry are also housed with several people in space-saving accommodation. Unlike in Germany, the meat factories are located in the flat countryside where there are fewer inhabitants. The risk of infection by the Corona virus is therefore lower. Nevertheless, the people there depend on the jobs. If they don’t take the job, which pays around $15 an hour, they’re out of a job. Indeed, the agglomeration of activities in the meat industry is comparatively small there. Accordingly, there is little competition, as around 80 % of the meat supply is provided by a total of four companies.

Due to the Corona virus, meat companies are required to continue paying wages when workers are sick. Hourly rates are also being increased to attract workers. This is to prevent people who are already infected from carrying the virus back into the factories and to prevent new employees from becoming additionally infected.

Stricter requirements and rules for the meat industry

The Corona virus is largely responsible for the fact that much stricter regulations are now being introduced in the meat industry. In future, for example, no workers from low-wage countries are to be employed in meat companies. As of 1 January 2021, only employees of the company itself may therefore carry out activities. It is important to note that the new regulation does not apply to the butchery trade with its micro-enterprises. To ensure compliance with the new requirements, there will be stricter and more frequent checks in future. Non-compliance can result in hefty fines.

Ministers Julia Klöckner and Hubertus Heil are backing these new requirements, while the meat industry feels discriminated against. There is talk of “arbitrary discrimination”. This is because the completion of certain work on a certain scale may now no longer be carried out by factory workers. According to the VdF, there is a threat of serious economic damage and that part of the meat production will move abroad.

After the cases of Corona sufferers in the meat industry became known, the meat industry association presented a five-point plan. In letters to the Chancellor and other cabinet ministers, the VdF proposes to introduce measures that have been in place since 2014 on a mandatory basis. This concerns, among other things, the voluntary commitments made by the companies with regard to the accommodation of the contract workers. 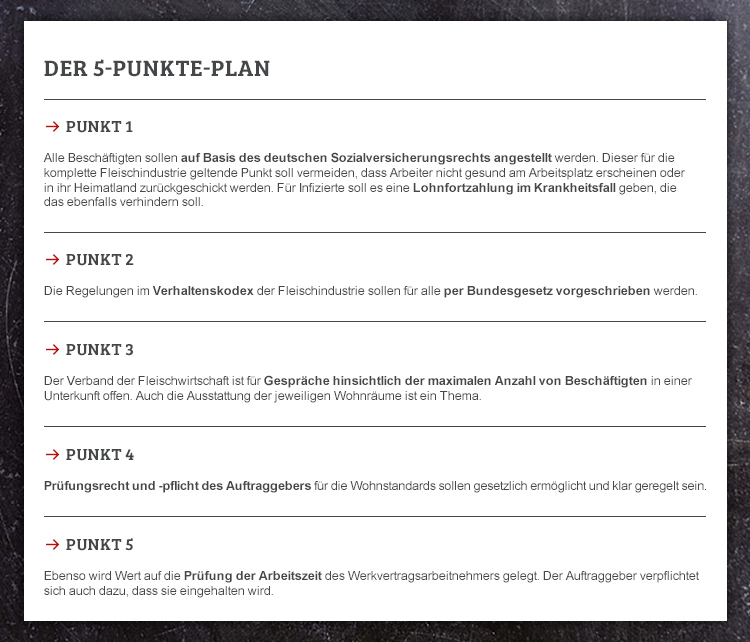 The most important lesson to be learned from this five-point plan is that the meat industry should not be blamed for individual cases. Federal legislation should be put in place. This does not only include companies where there are no deficits in the criticised areas of animal welfare, working hours and housing.